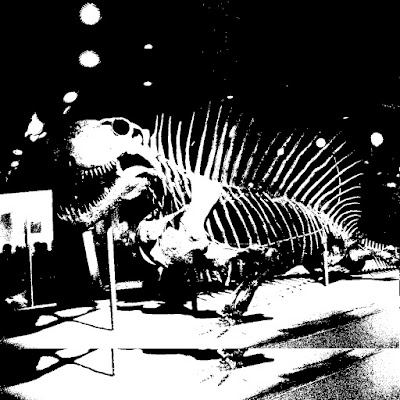 This would have been a five track 12" EP except I never managed to get the money together to have the thing pressed, and the longer I waited, the more I realised no-one would buy it or even want to distribute it, and eventually I stopped caring. I seem to recall that Mark of Impulse fanzine (and Konstruktivists) ran me off twenty-five CDR copies, but my disillusionment with CDRs had set in by the time they came in the mail and I never did anything with them. It was recorded at JTI Studios in Brixton with Ian McKay engineering - same place as various Alternative TV and Skullflower records, and (as I've only realised just now) Ramleh's fucking fantastic Blowhole album. It would be nice to think some of the magic rubbed off, but it probably didn't. Anyway, I was at JTI recording a load of stuff with UNIT, probably material for the album which never happened and (frankly) would have been about a million times better than the one which did, and I've a feeling there were a couple of days we had booked upon which it turned out that Dave or Pete or someone wasn't going to be able to make it. Andy was going to ask Ian, who ran the place, if he could just have his money back for those days and let someone else make use of the studio, but I said I'd pay for those days and use them to record some of my own stuff. So that's what I did. This was January and February, 1998.
As you can probably hear, I was suffering from neofolk poisoning at the time, but never mind. Penitent wasn't really supposed to be on the non-existent 12" EP, but I recorded it seeing as I had some time left after we'd finished the first five. Lonesome Town is a Ricky Nelson cover, for some reason which made sense in 1998, and the other tracks, excepting Shoemaker-Levy 9, Fragment G, are fancier versions of things I'd already recorded on various War Drum tapes, as can be found elsewhere on this blog. Most of this was just me, although Andy Martin sang backing, played drums, and delivered the spoken vocal on Shoemaker. Ed Pinsent, whom you may recall from either Pestrepeller, Mystery Dick, Sound Projector magazine or his Resonance FM show, played guitar on Shoemaker.

I don't know. It all seemed to make sense at the time.


Download these six tracks by clicking on this link.

Return to Index
Posted by Lawrence Burton at 09:27