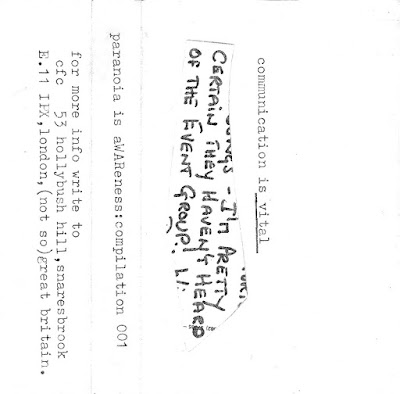 Regardless of accusations I may or may not have made last week, it really has to be said that Larry Peterson knew how to put a compilation together. A Sudden Surge of Power, which he released on his own Cause for Concern label, remains pretty much my favourite of its kind, and frankly it still pisses over better publicised tapes from the same era, notably the undoubtedly decent but somewhat overrated Red Sand. I'll put A Sudden Surge of Power up here at some point in the not too distant future, but in the meantime, here's Paranoia is Awareness - Larry's first compilation, maybe not the classic that was the later collection, but a fucking good showing nevertheless.

Because I'm a generous old fucker, I've scanned the A4 booklet which came with the tape, so that's included as a series of JPEG files in the folder which comes with the download. My copy was customised by various members of the Apostles and the Assassins of Hope, adding sarcastic commentary to their own respective pages before Larry got the thing to the safety of an envelope with my name and address written on it, so although I've cleaned up all the scans as much as I could so as to get rid of yellowing, coffee stains and so on, I left the thoughts of Chairman Martin as they were because it seemed right to do so.

The inclusion of the booklet also means I don't need to spend too much time telling you about these artists. You should be familiar with the Apostles, Matfield & the Pond and We Be Echo if you've been following this blog, and Third Door from the Left were the group of which Kevin Thorne was a part before he started recording as We Be Echo. The track here is actually an excerpt from a Third Door from the Left live tape released by Cause for Concern, one which I might put up here providing it hasn't been reissued by Vinyl on Demand (I still haven't got around to checking, although I know Frank did Face the Firing Squad on vinyl). You will no doubt recognise the Nocturnal Emissions tracks which first appeared on their classic Fruiting Body album which you own, or you should own, and if you don't, get the fuck away from me. I think Plastic Bag were pals of Nigel from Nocturnal Emissions as they had a mailing address around the corner in Camberwell and used to put out a zine called Apocalypso a Go Go, of which one issue was full of extremely naughty pictures and another was a special on Nocturnal Emissions. They also recorded some great harsh electronics as Brides of Christ II. Finally, I seem to recall seeing Nervous Legion mentioned in the cassette column in Sounds a good year before Dave Henderson started the whole Wild Planet thing, so I have the impression they were something significant which vanished off the radar just as I was becoming aware of this sort of stuff. I'm sure Larry told me that the guy behind Nervous Legion committed suicide, but I could be getting my wires crossed. Terrorist, as it appears on the tape, seems to end with the sort of repetitive scratches which suggest it may have been taped from a 7" single (can't be heard here due to my cleaning up process), which is intriguing; so if anyone knows anything about Nervous Legion, I'd love to know more. I've always thought those two Nervous Legion tracks were the bollocks.


Download all thirty-five tracks, cover and twenty-page booklet by clicking on this link.

Return to Index
Posted by Lawrence Burton at 08:21

Email ThisBlogThis!Share to TwitterShare to FacebookShare to Pinterest
Labels: APF Brigade, Apostles, Assassins of Hope, Cause for Concern, Matfield & the Pond, Nervous Legion, Nocturnal Emissions, Plastic Bag, Third Door from the Left, We Be Echo