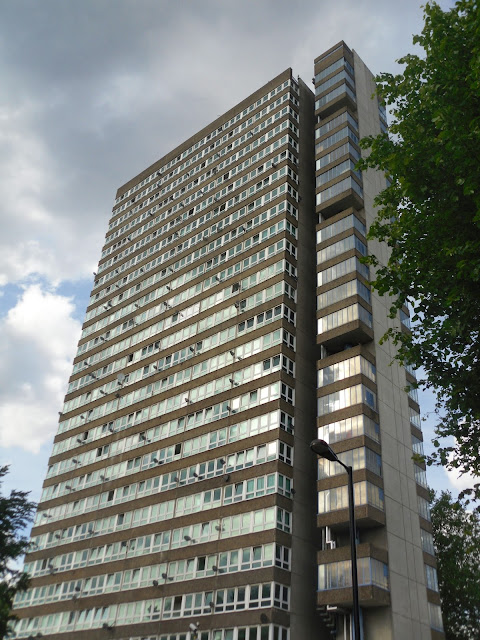 That's Maydew House in Bermondsey which would be where we recorded the material on this tape, because I can't be arsed to scan a boring generic cassette inlay card. Carl's flat would be somewhere at the bottom on the right, and I think Danny Baker lived on the floor above at some point. The arbitrary title of this cassette derived from a conversation I had about double negatives with fellow Catford based postman Micky Evans who said this was his favourite one, as uttered by some bloke on a television documentary. The tape was recorded by Carl Glover and myself on Carl's portastudio between Sunday the 27th of October, 1991 and Saturday the 25th of January 1992, except Tim Song, which wasn't on the original tape. Tim Song and the recordings immediately before and after were recorded on Saturday the 11th of November, 1991 with Christine - Carl's girlfriend - as part of a tape letter sent to my friend Tim. This seemed as good a place for it as any. There are plenty of other entries concerning the Dovers to be found elsewhere on this blog so if you're still confused about anything, please refer to the index which can be found at the foot of this one.
As for the stuff which isn't self-explanatory - 8-Ball 8-Ball Martin De Sey, named in honour of a former Cravat, was us going through my address book and insulting everyone in alphabetical order. There's a longer, probably funnier version on one of the other tapes. Cheer Up, Gen is the very definition of self-explanatory but I mention it so as to request that anyone of my acquaintance who happens to know him please refrain from grassing me up. It was a long time ago, he probably wouldn't get it anyway, and yes - I'm sure he has a great sense of humour. Ghost Dance is almost a Prince Buster cover. Telstar Air Strip was done for a Joe Meek themed compilation done by Chainsaw Cassettes, but the bloke didnae like it.
The Glenn referred to in passing at the end of the tape was, as is probably obvious, Glenn of Konstruktivists, Whitehouse, former Throbbing Gristle handler etc. etc., this being around the same time Carl and myself recorded stuff with him which ended up on some Konstruktivists CD or other. Anyone who calls themselves a true fan of the Gristle will therefore already have this material on the luxurious 360g splatter-effect vinyl triple album released by Waitrose Org a few years ago, much to the envy of those lightweight Johnny come lately part timers who were still listening to Captain Beaky when we were snorting nose candy off Chris Carter's gristlesizer backstage at Knebworth.
Crazy times.


Return to Index
Posted by Lawrence Burton at 16:30