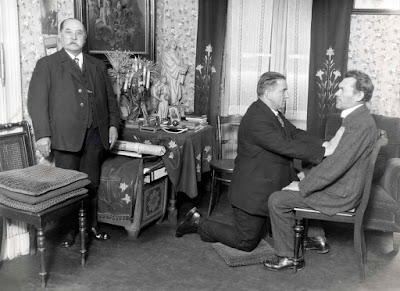 I don't know much about this or its author and presenter, but I taped it from the radio back in 1990, specifically from BBC Radio 4. According to stuff on the internet it was first broadcast on the 7th of May in that year, then repeated on the 13th of November. It's a fifteen minute documentary about a cult which took over a small German town in the 1930s. The cult was based upon the notion of cheese as having supernatural healing powers, and if I still need to sell you on the idea, then you probably have something wrong with your brain. Just listen to the thing, okay? You won't regret it.

This is doubtless copyrighted material, and I am obviously not the owner of that copyright; but really I just want to spread the goodness, this being more or less the greatest thing which has ever been broadcast on Radio 4, and no-one has yet put it on a CD or whatever so far as I am aware. Anyway, there's no point in suing me because I live in Texas and I don't have any money.

By the way, the tape was terrible quality so I had to clean it up on the computer, which worked but has left it with a sort of mildly autotuned sound, but at least you can now hear the thing without it sounding like you live next door to the Grey Wolves.

Return to Index
Posted by Lawrence Burton at 06:18