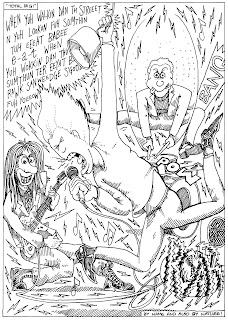 Here we are - yet more Total Big, this time from the point at which we just about had a set and were starting to sound like a band. I'm not really sure what else I can say about this stuff which hasn't already been said in the course of previous blog entries - for which please refer to the index as linked below.

Both of these rehearsals occurred at Hollytree House, Otham, Kent, probably in the kitchen - the first sixteen tracks were on Saturday the 18th of January, and the rest were on Saturday the 8th of February, both in the year of our Lord, 1986. I don't have any corresponding diary entries of particular interest to either of these dates, although on Friday the 17th of January I wrote:

I actually remember what happened today. I paid Charlie some petrol money and him, me and Garreth went over to Chatham to shoot some videos with Glenn. We drove around trying to find a spot, only to find out that the portapak wasn't working. We went to a pub in Gillingham for some food, and Glenn told us he has become a born again Christian, which was a bit of a shock. We went back to Maidstone and we all bought cap guns.

That would be Glenn from Konstruktivists and Charlie who now draws The Walking Dead (and whose band of the time have featured previously on this blog), for those of you with a taste for obscure industrial music-comic book crossover trivia. Talking of industrial music, one channel of Chris's tape deck was on the fritz so there's a couple of tracks which sound a bit like Controlled Bleeding. It wasn't on purpose.

Chris recorded the original tapes, by the way, then edited each one down to a single side of a C90 of just the stuff which sounded like a song, so that's what you have here.


Download the thirty-two tracks by clicking on this link.