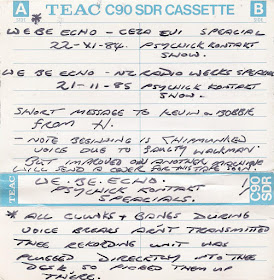 I had corresponded with Kevin Thorne of We Be Echo on and off whilst at college (I mean whilst I was at college, not whilst Kevin was at college) and he'd contributed tracks to a couple of my compilation tapes - Soma Improvement on Circumcise the Foreskin of Your Heart, plus Jump Up and I Think I May Be Coming on Avanti! which was never completed, never surfaced, and I've somehow managed to lose the master tape over the years. Oh well. Anyway, Kevin and I lost touch somewhere along the way.

I'm going to assume you all know who We Be Echo were. This was their first tape and it's a fucking cracker. I'm going to assume that link is still good being as I haven't used it myself. If not, I may digitise my own copy of Ceza Evi when I get the time.

At some point in 1991 or maybe 1992, having moved to that London, I at last met up with Larry Peterson of Cause for Concern tapes, the man who introduced me to We Be Echo and a whole load of vaguely related artists. By this point Larry had decided industrial music is evil - as he put it in those exact words - and he'd turned his back on the genre so as to focus on his capitalism. This worked out well for me when he sold me a Broken Flag compilation album for peanuts (and which is now worth several million pounds due to the presence of Stereolab's noisier teenage years) and gave me a carrier bag full of tapes which Kevin Thorne had sent him.

Some of these tapes were shitty Woolworths cassettes with just a couple of tracks on them, so what I have with me now are three tapes - a C46, a C60 and a C90 which I seem to have compiled from the original tapes by adding tracks from some to the blank sections at the ends of others in the name of keeping things neat and tidy. I'm going to stick these three up on this here blog over the next couple of months on the grounds that they seem to comprise otherwise unavailable material, and this is the first one. Unfortunately my hypothetical reorganisation leads me to suspect that some of the tracks have taken on new titles - possibly invented by myself - in the event of my copying something for which there was no written information on the original (since discarded) inlay cards. I don't know. It was twenty-five fucking years ago. Be happy this stuff still exists at all.

Here's the first one which presents a couple of New Zealand college radio shows as broadcast, but not actually recorded as broadcast (see cover notes), plus an interview with Kevin and Bobby Thorne which may or may not have been transmitted. When digitising this tape, I started breaking it all up into individual tracks but the labelling began to annoy me, so in the end I've kept each broadcast as a single continuous chunk of sound. My other two We Be Echo rarities tapes seem to include all of the tracks featured here which didn't turn up on the special edition of Ceza Evi, so if you need them as individual tracks (possibly better recordings - not sure as I haven't listened to the tapes in a couple of decades) that will happen shortly.

Also, I've indulged in some editing here: Greatest Lover on the original tape runs out at the end of side one then continues at the start of side two, so I've spliced the two halves together in order to make the join less aggravating for the listener; I've monkeyed around with the interview a little as well because Kevin and Bobbie's replies were ridiculously quiet in comparison to the interviewer's questions, and there were a couple of long, awkward pauses of the kind which are probably inevitable when assembling this sort of material from different tapes, so I chopped a few of those out. The last two tracks probably aren't called Werkout 24 or Werkout 25, but that's what I wrote on the inlay card, presumably after copying them over from another tape. One of the other tapes has a couple of tracks called Werkout 22 and Werkout 23 on there, so maybe I took a guess based on that. They don't actually sound like finished tracks to me, but who knows? They might not even be We Be Echo. They could be REO Speedwagon out-takes for all I know.

More We Be Echo in another month or so.


Download the shows and cassette inlay card by clicking on this link.