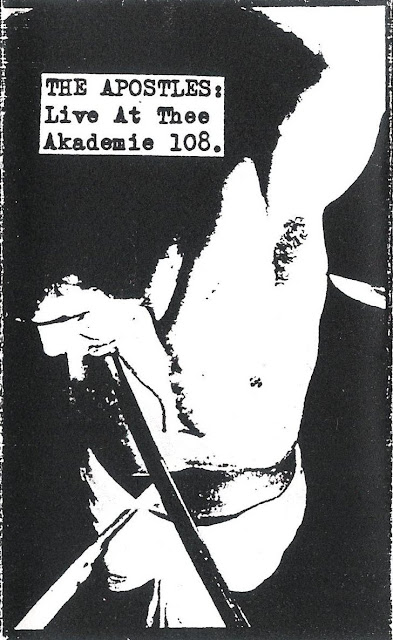 Here's my last Apostles tape, which is a bit of a relief. Weirdly, I have no memory of having acquired this one, or listening to it up until about a week ago - not sure why. This fact seems additionally mysterious given that it may even be their best, or their best which isn't Second Dark Age if you prefer.

'But Loz,' I hear you cry, 'how can that be? The Apostles were notoriously ropey live, and this is surely a recording of some gig.'

Well, yes, but as Andy explains on the cover, it was recorded direct from the microphones and is therefore good quality because there's no audience sound - which I'm sure will make sense to our technically minded subscribers. I haven't read the rest of the cover because I've spent quite enough time squinting at microscopic type over the last month, but I expect there will be some account of how our man did such a good job playing the guitar whilst singing at the same time, something he used to have trouble with. Actually, he seems to be playing a couple of guitars at the same time on a few of these tracks, which must have taken some practice, and was surely a treat for everyone who attended this event which was definitely a genuine live gig with an audience and probably a bloke selling pies at the back.

My guess is that this was some sort of Apostles bowing out thing, hence all the old favourites - and definitive recordings too - plus covers of tracks by Chelsea, the Pop Group, and er... whatever that last track was. Certainly it seems like a precursor to Academy 23, not least with thee spellings which I've ignored because I'm a grown man; and Pagga in Pilrig was relocated to Pilton and became an Academy 23 standard.

If anyone doesn't get the Apostles, this is probably the one to listen to.

Download the twenty-three tracks and cover by clicking on this link.

Return to Index
Posted by Lawrence Burton at 13:34