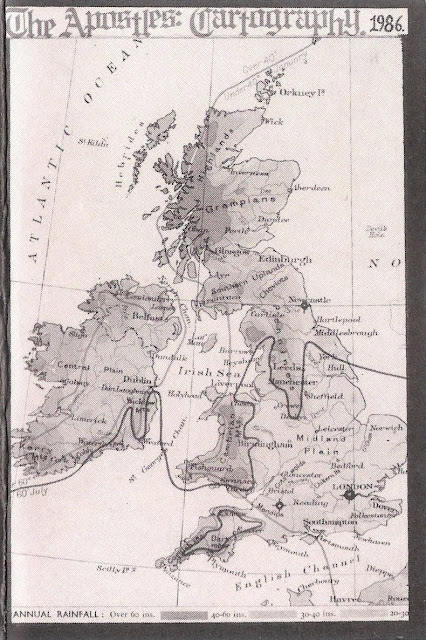 Cartography was consistently billed as an Apostles album, as distinct from a tape, although it doesn't appear to have been included amongst those reissued on the UNIT Bandcamp page, so er... whatever. The idea was that the tape came with a folder of artwork - all separate sheets rather than a booklet - and the art was part of the whole package and as integral as the music; so I suppose Cartography could also be seen as a dry run for Academy 23's Europe Awake! I'm not sure if this was the last Apostles thing, but it was pretty late and the experimentation seems to suggest them getting a bit weary of tried and tested formats, hence two long pieces of continuous music, each taking up a side of the tape. As you will hear, there didn't seem to be much point breaking them up into the individual tracks listed on the information sheet, so I haven't - excepting the final number at the close of side two which is clearly its own thing and has been edited as such. It isn't listed on the information sheet so I've assumed it's called Forbidden Love.

Side one is mostly just Dave noodling away, and is fairly proggy. It's a fairly understated piece as a whole presumably thanks to the absence of Andy, and prefigures the HAVE tapes Dave later gave away with issues of Harlequin, so it's actually pretty great. Side two is some performance art thing undertaken by the Demolition Company with Dave and Andy somehow involved. It's a live recording and a bit of a racket. I guess maybe you had to be there.


Download the tape, cover and art portfolio by clicking on this link.


Return to Index
Posted by Lawrence Burton at 11:54