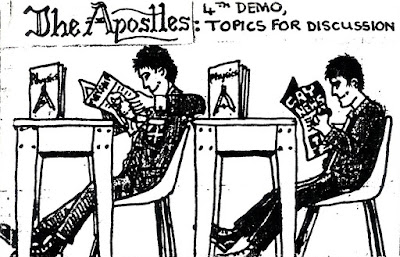 More Apostles, and with others still to come. This one seems a bit more patchy than the first two, but still rates a listen, I'd say, and is distinguished by a proliferation of what I suppose we'll have to call jams or presumably improvised numbers which never got re-recorded or recycled as anything else - pretty unusual for one of Andy's groups. Talking of which, I was a bit disappointed to find The Island, which I quite liked and took me fucking ages to learn to play and which I thought was an original UNIT track back in 1997, was actually recycled from the thing at the end of side one of this tape; therefore bah. This tape also sees the apparent arrival of the bluesy influence in the band's music, for what that may be worth; and We Buy a Hammer for Daddy acknowledges Andy's love of the Lemon Kittens, but isn't actually one of their tracks, so far as I'm aware.
Since last week I've discovered that the excellent Mr. Zchivago of Die or DIY? has a ton of Apostles freebies on his blog, including a few I don't have, and even the first one. I'd say I've no idea how I failed to notice this, but then I've only just realised the blog is called Die or DIY? rather than DIY or Die! so clearly I'm not very observant. Anyway, have a look here, then please do yourself a massive favour and have a nose around the rest of the blog because he has some real treasures on there.


Download the fifteen tracks and cover by clicking on this link.

Return to Index
Posted by Lawrence Burton at 18:55