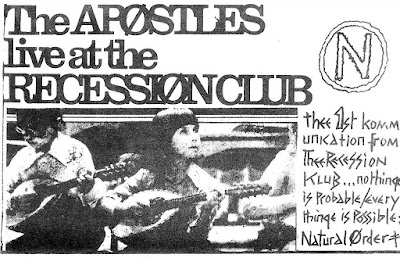 This is my second Apostles tape from the Protect & Survive label, and a bit of an oddity, I suppose. The performance was live at the Recession Club in Hackney which was organised and run by the Apostles, Larry Peterson, and probably some others too - and a lot of your industrial faves played there before you had even heard of them because you were still into Depeche Toad and Howard Jones. I'd heard of them though, but then I was there, mate - well, not actually there at the Recession Club as I was still in short trousers and too likely to get bummed flat if I went down to that London on my own, but I was there in spirit, or at least in the form of a little pile of letters and badges in Andy's house.

I never saw the Apostles live but the legend has it that they could have used a few more rehearsals (which was arguably true by the time I joined, after one name change or another), but on the other hand, this one sounds like it was recorded through the PA - hence lack of audience sound, unless they had all been driven away by Bourbonese Qualk or whoever. Additionally, they lacked a drummer, so instead played as a duo with tapes, but not actual tapes of drums, just tapes, such as a recording of Larry Peterson and Dave having a chat as you can hear during Rediffusion Refugee. I remember finding this a bit underwhelming when I first heard the tape, but now I think it works quite well, particularly whatever the hell that sound is on The Scream. Oh - and I know there's drumming on the first and last tracks, which would be Kev of Three Heads Nodding, sadly no longer with us according to Chris Low, another former Apostle from this era, due to a certain fondness for the old arm candy. Shame - didn't know the guy but he wrote nice letters.

...and the only other thing I have to say is to point out that Splitting in Two is obviously the ATV song, and is chuffin' fab.

Return to Index
Posted by Lawrence Burton at 11:42