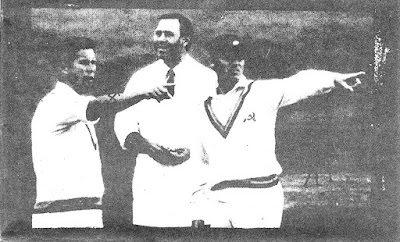 We're now entering the era during which new Apostles tapes tended to comprise remixes of the stuff they were recording and releasing as 7" EPs, which are still available in original form here - at least I assume they're in original form. I have the records so I've never bothered to download the MP3 versions, or whatever format they're in, so if these are all eighties style disco megamixes which Andy did without telling anyone (which I wouldn't put past him), it ain't my fault, guvnor.

This was one of a couple of tapes put out by Protect & Survive as run by a bloke called Christ, Crystal or possibly Chris, depending on what week it was. I think this was Andy helping the guy out by giving him some Apostles material with which to kick off his label. These are mostly variations on tracks from the second EP - which was fucking brilliant by the way - supposedly remixed, although I can't tell with a couple of them; but you're getting this for free and it's still cracking stuff regardless of how it relates to what was on the record, so nyer.


Download the seven tracks and cover by clicking on this link.

Return to Index
Posted by Lawrence Burton at 13:34

Email ThisBlogThis!Share to TwitterShare to FacebookShare to Pinterest
Labels: Apostles