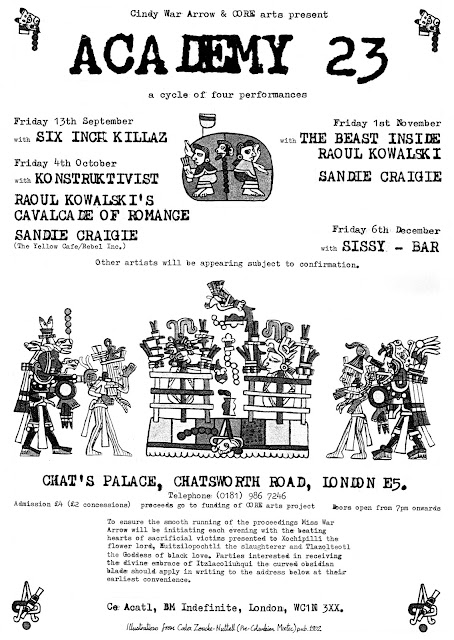 This was our last gig as Academy 23. It was supposed to be four gigs, or so Andy told me, but the first was cancelled, and then so were the other two following this one. It was put on by Core Arts, who were associated with Hackney Hospital and something to do with the late and very much missed Robert Dellar, and word came back that they weren't happy about Academy 23 trying to take over the event, as it was phrased. My understanding was that they had asked us to arrange it all and to find a load of bands to play, so who knows? Anyway, Konstruktivists, somehow expanded to a five piece line-up including a flautist, came down from Norfolk and played, and were amazing. Then we played, or maybe we played first. We had been rehearsing for months and it sort of paid off, although I sang on a few of the songs where Andy was obliged to play complicated guitar solos, and my singing was pretty shit, although I had fun at the time. Otherwise this is probably the best tape I've heard of any live event involving Andy. As usual it was a mix of old Apostles songs, some with new, slightly more pompous lyrics and different titles, plus legitimate Academy 23 numbers like The Stranger which was written by Dave and which we added to the set on my request. I dressed up as a bird and was subsequently subject to marriage proposals from a Nigerian gentleman in the audience, so that was an interesting new experience. I also think Jess Hopkins was there too, although I don't think he performed that night.

I doubt anyone will notice, so I'll mention it anyway - but the microphone fucked up so there's a silent second occurring on the tape during the first chorus of God of Death. Using my audio editing software I have rectified this by pasting the equivalent bars from the second time we played the chorus. You probably won't notice the join. This is because I'm amazing.

Nice to have a version of At the Academy on tape. I probably haven't listened to this cassette since the gig, having assumed it to be shite; but we put one hell of a lot of work into learning how to play our ten-minute prog instrumental, so it's nice that, contrary to what I believed, it still exists in more or less listenable form.

Return to Index
Posted by Lawrence Burton at 09:36