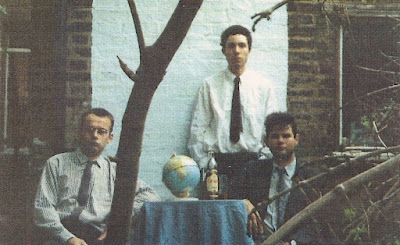 This was the one they put out just before I joined. To be honest I've barely listened to the thing as it never made much of an impression on me, which is partially why it ended up in the suitcase during that first raid on the mystic treasury of cassettes still located at my mother's house on the other side of the Atlantic ocean - just curiosity, basically.


Digitising and listening to it now, I can see why it didn't get much in the way of rewinds. It's all right, and in fact it's decent by the standards of most bands so far as I'm concerned, but there's not much that really stands out as amazing. There's the Boyd Rice-isms which seemed a lot funnier then than they do now, at least to me, and the more tuneful stuff is all right but could have benefited from a better mix, or at least a generally louder mix relative to the other tracks; and then there's fucking Shitfag. I really can't work out what Pete was playing at with that one - anti-smoking power electronics. You don't like smoking, dude. We get it. Was it supposed to be funny, at least to the sort of people who chuckle over amusing run-out spiral mottos on early Whitehouse records? Was it supposed to be funny with a serious message, namely don't smoke those fags, you unhealthy fucker. I don't know. Pete was always a bit straight-edge whilst also being quite difficult to figure out, as I realised on the day I picked up some fanzine he'd had printed at Catford Copy Centre on the the grounds of it being quite near where I worked, said fanzine turning out to be some kind of Third Reich appreciation society material. At least that's what it looked like. Hopefully I was wrong.

As a point of possibly minor interest, my own unfortunate encounter with the Terror of Toxteth referred to in Biological Catastrophe is detailed here.

Well, some of this is good. Some of it's pish. It's a tape that didn't quite know what it wanted to be. Not recommended for use at parties.


Download the twenty-four tracks, cover and booklet by clicking on this link.

Return to Index
Posted by Lawrence Burton at 11:08

Email ThisBlogThis!Share to TwitterShare to FacebookShare to Pinterest
Labels: Academy 23